Myna Marie Meissner grew up in Glendive, Montana, where her father owned a butcher shop and her mother worked as a dietician.

In 1968 she married Ron Stroth, a naval medical officer. They had two children, Bob and Stephanie, and settled down in Scottsdale, Arizona. Myna taught fourth grade and was known for having high expectations for her students.

In 2011 Myna celebrated her 70th birthday with family in Colorado. The group took a hike in the morning, went out for a nice dinner, and topped off the day with a pitcher of PBR in a local saloon.

One year later—in the summer of 2012—Myna began to grow tired during her routine five-mile walks. That fall, her posture slumped and other symptoms followed. In the spring, Myna visited a neurologist, who ran a series of tests that narrowed the possibilities. In May 2013, Mayo Clinic Scottsdale diagnosed her with ALS.

Myna experienced extreme anxiety. She had panic attacks and couldn’t sleep. She had watched a close friend struggle with ALS, so she was all too familiar with the disease.

After a restless week, Myna’s doctor prescribed anti-anxiety medication that had an immediate calming effect. Myna was able to sleep, gain perspective, and slowly adjust to her new reality.

One of the first things Myna did was post a bright orange Do-Not-Resuscitate form on the fridge. She did not want to prolong her life without quality of life.

Once Myna had addressed her anxiety and stated her end-of-life wishes, a fundamental shift occurred. Even though she struggled with daily tasks on a physical level, she was able to accept her situation and approach her life with greater serenity, grace, and humor. 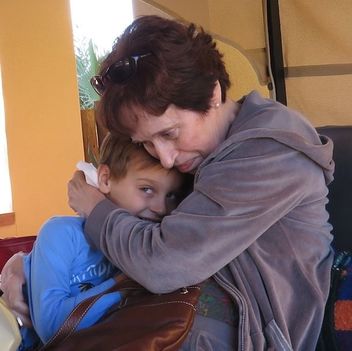 With her grandson, William, in 2014
Myna’s husband, Ron, was struggling with Parkinson’s disease, so family members helped them move into an assisted living facility. Fortunately, Myna and Ron had a long-term care policy that paid for their apartment and caregiving services.

Myna's son, brother, and sister-in-law coordinated logistics with medical professionals, took notes during appointments, and picked up Myna and Ron for outings and special occasions. Myna’s daughter, nieces, and nephews visited from out of state. Dear friends visited and supported her.

In December 2014, Myna called a meeting with her immediate family and the medical director from Hospice of the Valley. She was in a wheelchair, but could still speak clearly. Myna informed everyone that she did not want a feeding tube or invasive ventilation to prolong her life. Though difficult to hear, everyone respected her wishes.

​Nearly two years after her diagnosis—on May 15, 2015—Myna passed away on a peaceful, rainy night with four family members at her side.